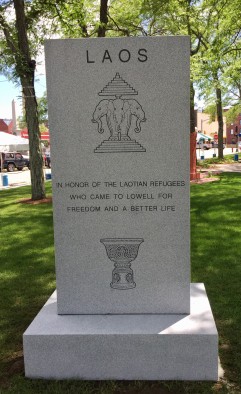 Please join us to build the Laotian Refugees Monument at Lowell, Massachusetts, U.S.A.

Posted by The Cultural Heritage of Lowell for Laotian Refugees, Inc on Saturday, August 4, 2018

The Cultural Heritage of Lowell for Laotian Refugees, Inc·Saturday, May 19, 2018

“Freedom for Laotian Refugees for the first time.”

– Laotian Refugees who escaped from the communist regime is now being recognized as a Symbol of Culture Heritage with a beautiful monument in the City of Lowell. This monument will belong to all Laotian Refugees who respect freedom, education and the reason why we came to this country. This is meaningful for all of us and for our children and grand-children through generations to come!!!

The “national origin” category of Laotian American, which is different from ethnic groups, includes all ethnic groups who lived within the borders of Laos, such as the Hmong, ethnic Chinese, Overseas Vietnamese, and ethnic Vietnamese.

Laotian immigration to the United States started shortly after the Vietnam War. Refugees began arriving in the U.S. after a Communist government came to power in Laos in 1975 and by 1980, the Laotian population of the U.S. reached 47,683, according to census estimates. The numbers increased dramatically during the 1980s so the census estimated that there were 147,375 people by 1990. The group continued to grow, somewhat more slowly, to 167,792 by 2000.[2]By 2008, the population nearly reached 240,532. Included are the Hmong, a mountainous tribe from that country with their own ethnic designation: Hmong Americans.

🙏😥😍 Thank you and greatly appreciated to the Honorable Mayor and the members of the City Council, City of Lowell and also thanks a million to the Board of Directors of the Laotian Heritage and the Trustees.